Get all three Valis games in one nice collectors box set.

This is a preorder for RetroBit's next physical cartrdige release - this time it's the Valis Collection containing all three Valis games (you can also buy them single, similar to how it worked for the Toaplan collection)!

The preorder period ends November 27th, delivery is planned to happen early 2023 (though it's hard to give good estimation due to the global parts shortage - it'll ship as soon as it's done :)).

The epic story of Yuko Ahso from ordinary schoolgirl to the Warrior of Valis saving Earth and the Dreamland from the invading hordes from the Dark World graced the SEGA Genesis®/Mega Drive over 30 years ago.  Those looking to own all three titles, they can look forward to receiving an additional master slipcase to store all three titles as well as a special acrylic stand displaying Cham, Valna, and Yuko 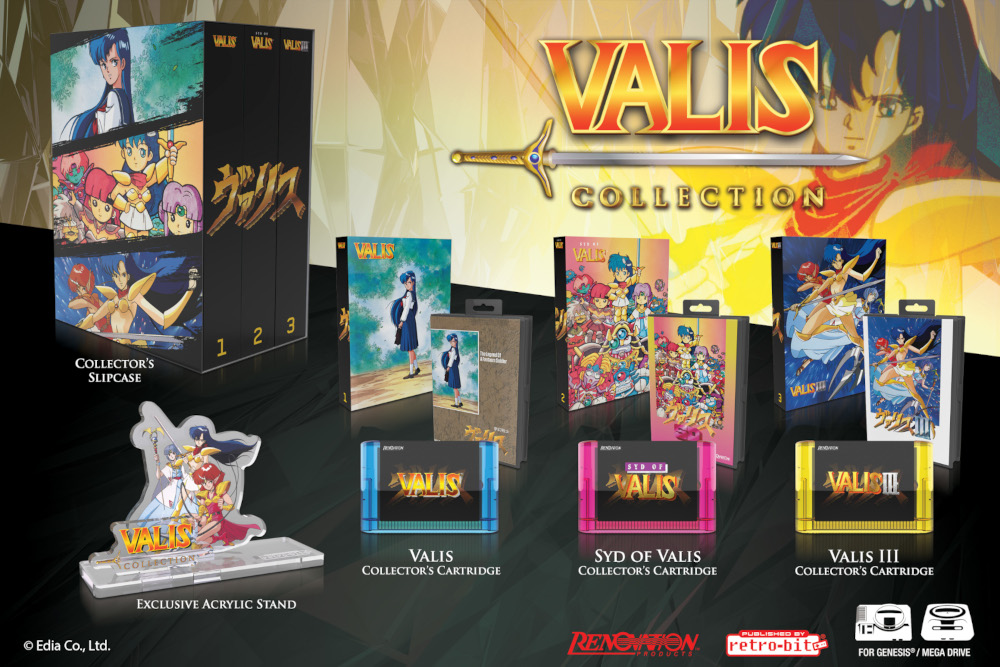 Q) What is included in this release?
A) As this is a collection of three titles, those who purchase the entire collection will receive a master slipcase, an acrylic stand featuring the trio from Valis III, as well as each of the three games themselves. Each game comes packed in a replica Genesis/Mega Drive clamshell case that features a reversible inlay cover with alternate artwork, a full-colored instruction manual, art card, and an individually numbered certificate of authenticity.

Q) Is this the same collection that is on the Switch?
A) This is an entirely separate collection independent from other Valis collections. None of the work between either release was shared and fans can expect the quality and attention to detail that RetroBit continued to offer for each of their releases.